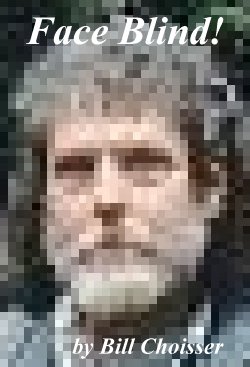 This is the world’s first (and to date only) book about face blindness. It has been published on the Internet so people in all lands can have access to it readily, and so it can be continuously updated.

In these pages, you will find information, much of which is not available anywhere else at this time. Until people with this rare condition began to meet each other on the Internet in mid-1996, assembling this kind of information would not have been possible. Even researchers who have had hopes of specializing in this condition have been frustrated by having seen only a handful of subjects over a lifetime. With the advent of the Internet, face blind people are coming together in heretofore unheard of numbers, and much is being learned with each passing month.

This document was first published as “Bill’s Face Blindness Pages” in January, 1997, based on information learned in the fall of 1996. Since then, it has grown considerably, to become the document you will now see.

Let Me Introduce Myself

Hi! My name is Bill, I’m fifty-five years old, and I have long black curly hair and a mostly-white beard. I live in San Francisco. If you’re like me, it helps a lot to remember what people have said if you have an image of them – all of them, not just the face – in your mind first. So with each chapter I’ve provided a photo. (Note: The photo you see is now five years old, but it will remain here for historical reasons.)

I was born with a condition that makes it difficult for me to recognize faces. There is a small part of the brain that is dedicated to that job, and though it is small, when it comes to recognizing faces, it is very very good. In me, that part doesn’t work, making me blind to all but the most familiar of faces. To help you understand this, let me compare it to two conditions you are probably more familiar with.

The main impact of this is, of course, that I find it much harder to recognize people than most people do. I have my ways, but they are slower and more tedious to use than the face method I lack.

How Bad Is It, To Be Face Blind?

That, of course, will unfold in these pages. But it is a real disability, and its effects on one’s life are not trivial. To give you an idea of just how “bad” it is, let me tell you about two things that have happened to me, and one that happened to a face blind friend.

Once around mid-day I met my mother on the sidewalk and did not recognize her. We walked towards each other, and passed within two feet of each other, on a not-too-busy sidewalk in a neighborhood shopping district. The only way I know about this is because she told me about it that night. She was not amused at all by this incident, and she has never forgiven me for it.

Another time I was on a hike with about twenty guys. The group spread out along a trail, and I talked for about half an hour with a guy in blue jeans. We parted, and after about fifteen minutes I began talking to a guy in red shorts. When I started the conversation with the usual introductory questions, he gave me a strange look and said we had just talked before. I denied having ever seen him before, and mentioned not having talked to anyone in red shorts. He said it had gotten warmer and he had ducked into some bushes to change. And then he recited back lots of the stuff we had talked about half an hour before.

And my face blind friend, a man in New York, tells his tale: “Some idiot here at work got mad at me this morning because he stood right next to me on the subway and he says that I ignored him. I gave him an icy stare and said, ‘Did you sayanything to me? I probably did not recognize you.’ He then proceeded to tell me that he was standing right next to me and I ignored him. I told him that I didn’t see him and he should have said something. Then he told me that he was right in front of me and what was I, blind? I told him to bugger off if he couldn’t be friendly. And I started to tell him that I was face blind, but he had already been such a jerk about the entire thing that I just walked away.”

I want to say it up front: Your mileage will vary. Not may, will. Every person is different, but this is particularly so in the case of people who share a condition but grow up isolated from each other. Contributing to that difference as well is the fact that face blindness tends to isolate you from people in general.

What you’ll see here is how it is, or how it has been, for me. Or, you’ll see how it has seemed to me from what others have said about themselves. What you’ll get here is a view, relatively rare in the literature, of how things seem from “the inside.” I reiterate that am not a professional. What you will not get is a guarantee. Pick and choose whatever you want that will help you. And feel free to discard anything that isn’t you.

I delight in hearing from others how it is for them, whether it be a resounding “me too,” or a description of how for them it is different. Every one of us on this planet is unique. I don’t expect you to be exactly like me.

In this same vein, please do not expect me to be exactly like you. Please do not write to argue that “I have it all wrong” because in your experience it is different. Just let me know how for you it is different (That I expect!) as well as how it is the same. If you have comments, they are welcome. Much of the information you see is here because of correspondence with others.

First, I’d like to share with you my story. Face blindness is as old as the human race, so why, one might wonder, did we have to wait all this time, until this guy born in 1946 in the Illinois Ozarks came along, for all of this to be brought together? That tale will be told.

Thereafter, these pages will follow a progression that is appropriate for you to learn about face blindness. To understand things best, you’ll need to consider first how most people recognize others and then how we do. After you’re familiar with how our recognition systems work, you’ll well appreciate how they can cause us to lead different lives in the ways we relate to people, such as emotionally, sexually, and socially. And finally, with a broad understanding of face blindness under your belt, you’ll be ready to use that knowledge to improve your life.

Not surprisingly, you may find the earlier technical stuff the most dry. At the end of each chapter a table of contents is provided, so you can jump ahead, and around, all you want, with ease. If you do that though, you will miss stuff, so do come back to the earlier chapters. Not only will you miss things if you jump around, but also you may not understand the later chapters as well without having read the earlier ones. So I would recommend you take it all in order, if you can.

We first look at how this all came to be.

This document is copyrighted. For information, or to contact the author, go to Appendix D, the Author’s Information Page.